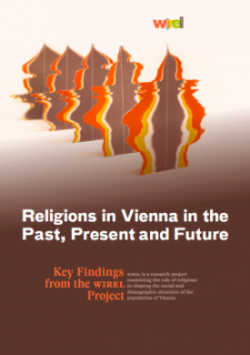 The role of religion is currently a topic of considerable public interest in Vienna as well as across Europe. Over the course of the last half-century, Vienna has witnessed rapidly changing religious composition accompanied by consistently increasing religious diversity.

The various aspects of research conducted by WIREL facilitate the global assessment of both quantitative and qualitative aspects of religious diversity in Vienna. A short report  – Religions in Vienna in the Past, Present and Future –summarises the research findings with the aim of making the trends, drivers, and socio-demographic consequences of the changing religious landscape of Vienna more accessible and understandable.

Download the WIREL project key findings report:
Religions in Vienna in the Past, Present and Future [pdf]

The WIREL project studied different demographic and religious forces that have shaped Vienna’s population composition throughout the past as well as the implications that such forces hold for the present and the future. In this context, WIREL examines the process of secularisation, investigates changes in the levels of religiosity, and reveals spatial patterns of religious diversity.

The main changes in the religious composition of the population of Vienna are two-fold: First, the concurrent decrease of Catholics and increase of the unaffiliated and, second, increasing diversity driven by Muslims and Orthodox growth. 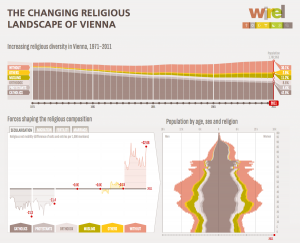 Explore the increasing religious diversity
and the forces shaping the religious
composition of Vienna (1971 – 2011)
online at: www.wirel-project.at/dataviz/

Religiosity in Vienna and rest of Austria

In the past, the Viennese population was clearly less religious than that in other Austrian provinces. At present, more people throughout Austria belong to the rather fuzzy group of the inconsistently religious.

37 % was the share of the population in Vienna
that never prays in 2008, while it was
21 % in other federal states of Austria.

Secularisation trend of Catholics in Vienna, 1971–2013 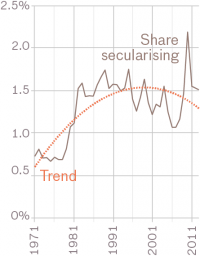 The share of Catholics in Vienna who were secularising increased until the late 1990s, but the trend indicates a decline.

10 % was the probability of leaving the
Catholic Church within 4 years if you did
not attend church during the period 2008–2012. 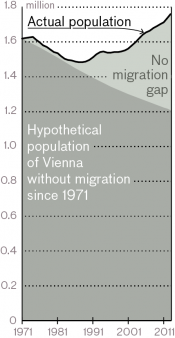 Instead of 1.8 million, Vienna would have less than 1.2 million inhabitants in 2013 if no migration had taken place since 1971.

34 % was the (estimated) share of Catholics
among international immigrants in 2013. 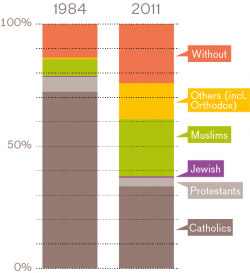 Increasing diversity in the cradle: Women who give birth today are much more religiously diverse than women in the 1980s.

31 years was the mean age at first birth
of Protestant women in 2011. 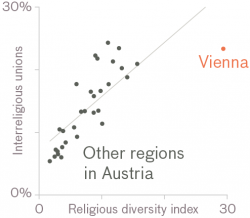 In Vienna, religious diversity is higher than in other Austrian NUTS3 regions. Outside of Vienna people are less likely to enter a mixed religious union.

Likelihood to commit suicide by religion (relative to total population)

Viennese with religious affiliation are less likely to commit suicide than those who are not affiliated.

2 years was the difference in
life expectancy at birth between
Protestants and Catholics at
the turn of the millennium. 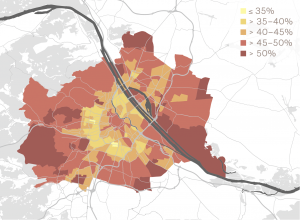 By 2011, Catholics account for less than 50% in most of Vienna’s neighbourhoods.

In 2011, more than 80 % of the population of Vienna
lived in religious or ethnic mixed neighbourhoods. 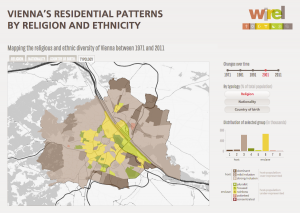 Mapping the religious and ethnic diversity of Vienna, 1971–2011 – online at: www.wirel-project.at/maps 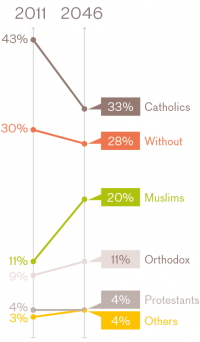 The difference in the shares of the three largest groups (Catholics, Without Religion and Muslims) will diminish over the course of one generation.

32.2 years will be the median age of the Muslim
population in 2046, compared to 47.7 years for
Catholics (according to the WIREL trend scenario). 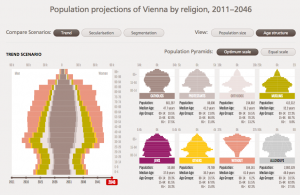 Population projections of Vienna by religion, 2011–2046 – online at: www.wirel-project.at/futures

The WIREL project has been conducted by researchers from the Wittgenstein Centre for Demography and Global Human Capital (IIASA, VID/ÖAW, WU) at the Vienna Institute of Demography (Austrian Academy of Sciences) and at the International Institute for Applied Systems Analysis (IIASA) and was funded by WWTF (Vienna Science and Technology Fund).